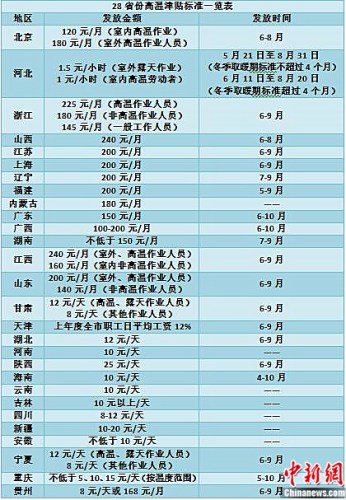 28 provinces high temperature allowance standard list
28 provinces clarify that the high temperature allowance is issued in some areas
According to the â€œAdministrative Measures for Heatstroke Prevention and Cooling Measuresâ€ revised in 2012, the employer shall arrange for laborers to engage in outdoor open air operations in hot weather above 35 Â°C and if they cannot take effective measures to reduce the workplace temperature below 33 Â°C, they shall be distributed to the workers. High temperature allowance.
According to the incomplete statistics of the reporters of the China New Network, there are already 28 provinces in the country that have clearly defined the high temperature allowances in the region. Among them, Shandong, Shaanxi and other places have raised the subsidy standard last year.
For example, last year, the subsidy for outdoor operations and high-temperature workers in Shandong Province rose from 120 yuan to 200 yuan per person per month; non-high temperature workers rose to 80 yuan per person per month from 80 yuan. This is the first time the province has raised this standard since 2006. The high temperature allowance standard in Shaanxi Province has been raised from 10 yuan per person per day to 25 yuan.
In addition, Hebei Province also set a summer high temperature subsidy trial standard last year. According to the standard, laborers engaged in outdoor open-air operations are 1.5 yuan per person per hour (including overtime work); there is no heatstroke prevention equipment or heat-resistant cooling equipment, but indoor workers who do not achieve the effect of reducing workplace temperature per hour ( Including overtime plus 1).
Judging from the time of granting high-temperature allowances, localities are also different due to differences in climatic conditions. For example, the distribution time in the northern regions such as Beijing and Shanxi is from June to August, while the release time in Hainan Province is as long as seven months, from April to October.
Due to the long span of the north and south and the large temperature difference in Hebei Province, the difference in the summer high temperature allowance is implemented. Among them, cities, districts, counties (cities) with a winter heating period of no more than 4 months (including 4 months), are implemented from May 21 to August 31 each year; winter heating period standards are more than 4 months (not The city, district, and county (city) including 4 months are executed from June 11 to August 20 each year.

National special inspection high temperature allowance cannot be a "paper interest"
In recent years, the Ministry of Human Resources and Social Security, the All-China Federation of Trade Unions and other departments have repeatedly stressed that employers must pay high-temperature allowances according to regulations, and heat-resistant and cooling drinks should not be able to meet the high-temperature allowance. In addition, many areas have also introduced corresponding supervision and punishment measures.
For example, in the "Procedures for Protection of High Temperature Weather Labor in Guangdong Province", it is clear that if the high temperature allowance is not paid to the workers, the competent department of human resources and social security at or above the county level shall order it to make corrections within a time limit and reissue; if it is overdue, it shall be 2000 yuan. The fine above 10,000 yuan.
Even so, in some places or some units, the high temperature allowance cannot be paid in time. For example, there have been media reports recently that construction workers have not received a high temperature allowance for three years.
The reporters of the China-Singapore network visited the Beijing area and found that although many outdoor high-temperature workers such as couriers and sanitation workers said that they had received high-temperature allowances in recent years, many people did not know the specific standards for the payment of high-temperature allowances.
"I don't know what the high temperature allowance in Beijing is. What should I send? When do I send it? These are not well understood." A sanitation worker in Haidian District told the reporter.
For the problem of inadequate implementation of high-temperature subsidies in some areas, some experts said that the current labor protection in high-temperature weather mainly relies on the supervision of labor inspection departments and trade unions, and the supervision and management work is relatively weak, and the lack of punishment makes the employers' illegal costs lower. In addition, workers are more vulnerable in the face of enterprises, and they dare not even claim rights. They are all important reasons why high-temperature policies are difficult to reach.
"In addition to having a corresponding punishment system, workers should also be aware of their rights and interests." Zheng Dongliang said that the issue of high-temperature subsidies involves a huge industry scope. If it is difficult to fully take into account the administrative law enforcement, employees can understand their own rights and interests. Better supervision of employers.
The reporter learned that at the beginning of this month, the Ministry of Human Resources and Social Security issued a notice on the implementation of special inspections of employers' compliance with labor and social insurance laws and regulations, and decided to organize special projects throughout the country from June 15 to July 29. an examination.
In the notice, the employer complied with the regulations on the high temperature allowance and was included in the inspection. The scope of the inspection is for all types of employers. Among them, construction projects such as construction municipalities, transportation, water conservancy, and labor-intensive processing and manufacturing, catering services and other industries and steel and coal enterprises are the focus. (Finish)