Study found that charging can make the material antibacterial

There is a close relationship between materials and electricity. For example, triboelectric nanogenerators that convert mechanical energy into electrical energy can be successfully prepared by selecting suitable materials and circuit designs based on the phenomenon of frictional electrification. When the electric field is applied to the material, it can also affect the various properties of the material, such as changing the charge quantity and charge distribution of the material. In contrast, what is less well-known is that biological cells are also carrying out intensive, elaborate, and active electrical activities at all times. The generation of energy necessary for cells to maintain their metabolism is achieved through the transfer of electrons between a series of proteins in the respiratory chain. The respiratory chain-associated proteins of eukaryotic cells are located in the mitochondria, while the respiratory chain-related proteins of microorganisms such as bacteria are located on the cell membrane. Therefore, microorganisms are more sensitive to external electrical disturbances.

Recently, the Beijing Institute of Nano-Energy and Systems, Chinese Academy of Sciences, discovered and confirmed a new way of working with materials in experiments, which can make the materials obtain antibacterial properties. The results of the study were published on the May 24 issue of Nature Communications (DOI: 10.1038/s41467-018-04317-2).

This study found that the research originated from the research work of the Nano-Energy Institute Li Zhou Group and the Wang Zhonglin Research Group, which was jointly published in Nano Energy in 2017. Assistant researcher Feng Hongqing was the first author. In that work, they connected the voltage and current output of the friction nanometer generator that collects the wave energy of water to the carbon cloth electrode modified with zinc oxide nanowires and nano silver particles, and let the bacteria solution flow from the carbon cloth electric field. Over. They detected the killing of bacteria that flowed through the system when the generator was working to provide voltage and current. After the generator stops working and no longer supplies power to the system, they continue to detect the killing of bacteria for a period of time. They discovered a peculiar phenomenon: During the period of 20 minutes when the generator stopped supplying power, the carbon cloth electrode modified with zinc oxide and nano silver still had a strong killing effect on the bacteria flowing through them! And if there is no power supply before the generator, the same carbon cloth electrode modified with zinc oxide and nano-silver has no such strong bactericidal action. Since the bacterial solution of this experimental system only flows through the electrode at one time, the electrochemical products that may occur during the electrification process have already flowed away with the previous solution, so the antibacterial performance after the power failure is not caused by the residual of the electrochemical product. Instead, it is caused by the "residual effect" of the electric field on the material. The researchers found that the larger the capacitance of the electrode material (zinc oxide nanosilver double modification> zinc oxide single modification> original carbon cloth), the stronger the long-term antibacterial performance after this power failure. At the same time, a strong reactive oxygen species signal was detected in the bacterial cells treated after the power failure.

On this basis, Feng Hongqing directed doctoral student Wang Minmin to carry out experimental work. The Li Zhou Group of Nano Energy Institute and the Zhu Jianhao Group of City University of Hong Kong worked closely together to systematically study this phenomenon. In this study, they used a new antibacterial system and a new capacitive electrode material: from the original dynamic flow system to a static treatment system, the use of capacitive materials based on titanium dioxide nanotubes, carbon modification to increase the material capacitance. Conventional DC and AC power sources are used to charge the electrode material and detect the antibacterial properties of the electrode after power off. Consistent with Nano Energy's findings, they also detected in the new system that after the power failure, the electric field did impart new antibacterial properties to the original non-antibacterial capacitive material, and the antibacterial ability was positively correlated with the material capacitance. In addition to supplying power from previous nanogenerators, the use of common DC and AC power supplies can produce this effect; active oxygen signals are also detected in the treated bacterial cell bodies. Based on this, they confirmed that charging can impart antibacterial properties to a non-antibacterial, non-antibacterial material that is a universal phenomenon. They named this phenomenon "post-charging anti-bacterial property." They also found that the charging operation did not have any adverse effect on the biocompatibility of the carbon-doped titania surface, and even promoted the adhesion and growth of osteoblasts on the substrate.

The discovery and validation of "antibacterial after charging" provides a new way of imparting antibacterial properties to medical implant materials. For example, in addition to traditional physical and chemical surface modification methods, people can obtain antibacterial properties on the surface of titanium dioxide implanted with orthopedic materials through simple charging, thereby reducing the risk of postoperative infections and complications. This new method of â€œantibacterial after chargingâ€ can also avoid the negative effects of traditional physical and chemical modification methods and promote the adhesion and growth of osteoblasts on the surface of implants, which is very beneficial to the repair treatment after fracture. At the same time, revealing the phenomenon of â€œantibacterial after chargingâ€ has also given rise to a new understanding of the interaction between electricity, materials, and biology. It is hoped that more electric modification programs for materials will be designed and developed. Many uses. The deep mechanism of this phenomenon is worth further exploration. The work of Feng Hongqing and Wang Guomin are tied for the first author, Li Zhou and Zhu Jianhao, and Wang Huaiyu, a researcher at the Shenzhen Institute of Advanced Technology of the Chinese Academy of Sciences, is the author of the co-author of the paper. 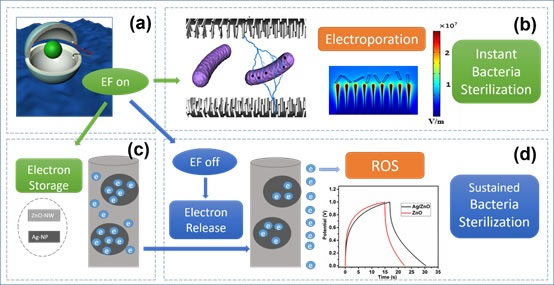 Fig. 1 When using the nano-generator to conduct electroporation water body sterilization experiments, it was found that after the electric field was applied to the ZnO/Ag electrode, the de-energized electrode still had the ability to kill bacteria. The size of the material's capacitance is positively related to the effect of sterilization after power failure. 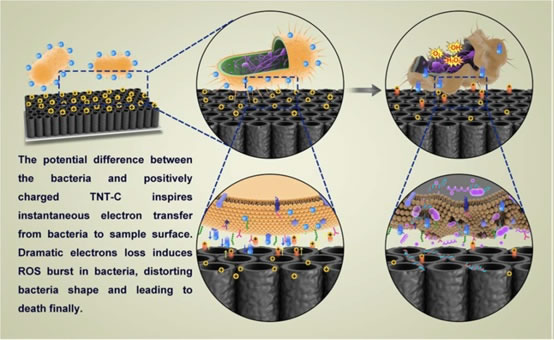 Figure 2 explains the mechanism of "antibacterial after charging". The violent charge transfer between the positive electrode sheet and the bacteria after charging causes an ROS burst and causes the death of the bacteria, which may be the cause of this phenomenon.

H-80 is co-accelerator and methylene donor for resorcinol based compounds for hardening or steel cord adhesion. Also produce the HMMM-50 & Resorcinol-80.

The CaO-80 Hygroscopic Agent, desiccant for rubber compounds of all kinds to prevent porosity.