Fig. 1 Observation of microscopic morphology of 20 nm thick gold films after cyclic loading. a, d are coarsened grains with multiple twins; b, c and e, f are enlarged views of the corresponding regions. Scales: a, df is 5 nm, b, c is 1 nm. 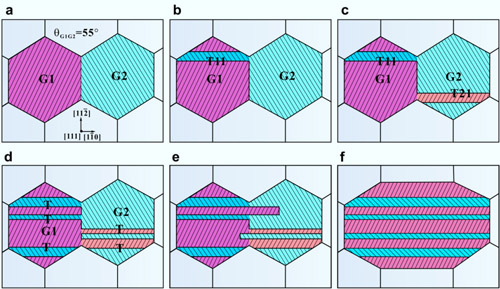 Fig.2 Schematic diagram of the physical mechanism of the growth of twin-assisted nanocrystals 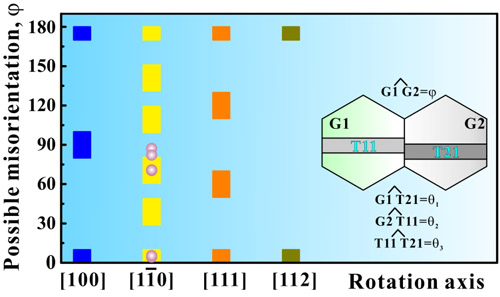 In polycrystalline metals, grain boundaries become unstable when the grain size of the material is reduced to the nanometer scale, although the grain boundary has an important role in hindering dislocation movement and strengthening the material. The main manifestations are: various mechanical loads at room temperature (uniaxial stretching, fatigue, indentation loading, etc.) can induce significant grain growth and grain boundary migration. On the other hand, due to the reduction of the grain size, the partial dislocation movement in the face centered cubic metal and the resulting twin behavior become more prominent. The key scientific question is whether grain growth/grain boundary migration at the nanoscale is related to the formation of twins at this scale. If so, what role does twin formation play in grain growth?

Recently, Zhang Guangping, a researcher of the Department of Materials Fatigue and Fracture Research at the Shenyang Institute of Materials Science, Chinese Academy of Sciences Institute of Metals (Chinese Academy of Sciences Institute of Metals) (including doctoral student Luo Xuemei and associate researcher Zhu Xiaofei) passed through the fatigue of gold films on nanometer-scale face-centered cubic structures. The observation and theoretical analysis of the atomic dimension of grain growth under loading reveals the physical mechanism for the growth of nanocrystals assisted by the twin. This study found that fatigue loading at room temperature resulted in grain growth in a 20 nm thick gold film with an average grain size of 19 nm; at the same time, the number of twins that had twins increased significantly.

Most of the grown-up grains have nanoscale multiple twins. Through observation and analysis at the atomic scale, it has been found that the formation of nano twins is an effective way of assisting grain growth. The physical process is that the formation of twins under fatigue loading can gradually change the local orientation of grains and promote the grain boundary to break down into easily migrating segments (Fig. 1); as the cycle time increases, two grains pass through The mutual twin formation and the continuous decomposition of the grain boundaries gradually merge and grow into one grain. To this end, researchers have proposed a new physical mechanism under the cyclic loading of "due crystal nano-scale gold thin film grain growth" (Figure 2).

The significance of this research result lies in the fact that, on the one hand, the basic mechanism of seed crystal growth assisted nanograin growth under fatigue loading and the relationship between grain orientation differences under this mechanism (Fig. 3) are clearly revealed, and twinning is illustrated. The limited growth of ancillary nanocrystals can consume cyclic plasticity to a certain extent, reduce the formation of fatigue damage, and thus have a significant effect on the improvement of the fatigue strength of metal films; on the other hand, crystals of nanoscale metal films and nanocrystalline metal materials. The design and utilization of the grain boundary stability, and the development of high-strength, high-fatigue and reliable structural metal materials have important reference values.

This study was supported by the National Natural Science Foundation of China, the "973" Program of the Ministry of Science and Technology and the State-owned (Joint) Laboratory of Materials Science in Shenyang.